“We’ve got some initial numbers to share with you. You’re not going to believe this.”

He was right. I sat there, staring at the screen thinking something must be wrong. These charts surely couldn’t be accurate. “Are you serious?” I asked, barely able to get the words out.

“Yep,” he replied with his signature chuckle. “Pretty good, huh?”

Here I was, one of the staunchest advocates of the power of e-learning—stunned. “We build learning to change performance” I say when meeting with new clients. “What do you want your learners to be able to do?” I ask them. And yet, even I wouldn’t have guessed we could move the needle so dramatically—especially since the course was a “soft skills” course. 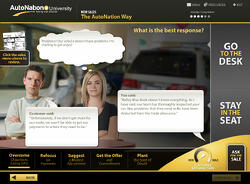 Improving the performance of specific actions in the workplace—proficiency using a software program, identifying where to place a box of shoes in the stock room, recognizing signs of damage on an eyeglass lens—is tactical. There is a step, there is an action, and there is an obvious consequence. But, negotiating with customers? Using sales techniques to sell a car? These are skills requiring subtlety; a delicate balance of confidence, enthusiasm, and persuasion. I knew e-learning could better prepare learners for things like negotiations and sales, but, could we actually build those skills? Apparently, the answer was yes.

The numbers I referenced earlier demonstrated—very clearly—that what we did was working. And, it was working better than traditional Instructor Led Training (ILT), long considered the only way to teach soft skills.

The e-learning course we developed with our client-partners at AutoNation followed the Allen Interactions CCAF Design Model.

Finally, the results were measurable. When we started the project, we asked what success would look like to AutoNation when learners performed better. Their response - new hires would sell more cars, at a higher profit, and stay with the organization during their initial six months. With that, we had a solid set of data against which to measure our success.

The pilot group significantly outperformed the control group in all three key metrics. Profit per vehicle was higher, more sales were closed per month, and employees were staying longer. Extrapolate this out to the larger audience of new hires each year, and the revenue gain will be in the tens of millions of dollars.

Interested in learning more about the results of this course? Join me as I present “People Skills Through e-Learning? Yes, You Can!” alongside Ken Gregson, Senior Director, Variable Operations Learning & Performance for AutoNation at Learning Solutions this week in Orlando. And, if you can’t attend the session, be sure to check out the course during the SolutionFest on Thursday evening.