Normally, coming up with the title for blog entries is the last (and most annoying) part of my role as a blogger. Uncharacteristically, this week I was pondering what topics to address, which led me to this title, which in turn has given structure to a two-fold message I’d like to share.

First—the importance of ACTION in interactivity. I often teach the Context-Challenge-Activity-Feedback model for designing interactivity and while students pretty easily grasp the significance of the CCAF components, they still struggle with where to begin when creating a new design. When I’m stuck, I often find that “Activity” is the most fruitful place to start. (One other thing that I have found helps me as well is to think of designing an “Action” rather than an Activity—at least to me, “activity” can easily become vague while “action” requires specificity.) 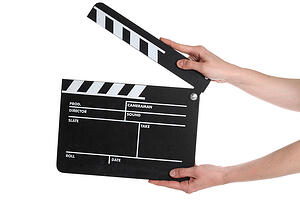 The performance objective normally expects the learner to DO something. Start there. Think about how the learner could DO that thing online. I don’t mean “read about that thing” or “answer questions about that thing,” or “do some other very interesting but unrelated activity that isn’t that thing.” I mean, rather specifically, how can learners be made to feel like they are really doing THAT thing? In many ways, this is the biggest hurdle in designing interactions. Typical e-learning hardware allows an embarrassingly limited range of default actions: typing letters on the keyboard, pointing to things, and, if you’re lucky, moving things on the screen. These are the literal actions we have as tools.

Unfortunately, little that we teach is dependent on typing, pointing, or moving screen elements. Instead, we want the learner to carry on a conversation, to avoid offending a co-worker by devaluing diversity, to wash one’s hands more thoroughly, or to perform any number of other tasks unrelated to a computer interface. You must be inventive in thinking how you might simulate the desired performance. In my experience, this almost always means creating visual elements to support a story in which the learner will be an actor—respond to spoken dialogue, interact with co-workers (through speech and action) in a diverse environment, carry out the hand-washing process, including some sense of scrubbing for some length of time—feeling some degree of authenticity. And this is the point where too many people are defeated by their authoring system, their limited resources, or simply by complexity.

But this is where the second idea from my title comes into play: that is, much of a good interaction is really just a great illusion. We have to work with the resources we have to create an illusion of complexity, not to create actual overwhelming complexity. In a movie, clever design makes us believe a street in Toronto is actually in Brooklyn, that Jessie Royce Landis could be Cary Grant’s mother (check out their birthdays next time you watch North by Northwest), or that actors repeating noble words actually hold those beliefs.

Fully embracing the art of illusion opens a world of possibilities for you in designing e-learning. If you are simulating the action of a machine in your training, you just need to build the correct path and only those incorrect paths that are likely to be tempting. An interaction is too often discarded because “it would be too complicated to build” in its entirety; however, meanwhile, building the illusion of a working system might not be any more complicated than building a standard multiple-choice question. So a picture of the machine in question with 2-3 hotspots (that are not explicitly called out as the “choices”) may be as effective as a fully functioning Flash simulation of the working machine. This thinking often makes the impossible something that is well within your abilities.

Posted on Wed, Oct 10, 2012
Next Post:
Leaving ADDIE for SAM: eLearnChat Interview with Michael Allen
Previous Post:
Excuse Me, Your Biases are Showing