You’d be surprised how often during a kick-off meeting with new clients I hear something like, “Make it game-like.” Game-like. What does that mean exactly? Fun graphics? Challenges such as chasing after roving fruit (think old school PacMan) or attempting to navigate a mysterious desert without speech or tools (Journey)? Does the client want learners pursued by an unrelenting zombie horde?

None of the above.

When I hear clients say, “Make it game-like,” I try to understand what they really want – the truth behind those words. They want it to be fun. They want learners to want to stay. They want that exciting, informal marketing you simply can’t buy when a learner says, “You have got to experience the new anti-money laundering e-learning.”

I’m a firm believer in bringing the best of gaming into e-learning whenever possible, so when a client seems sincere about pursuing gaming, I brainstorm and create something directly aligned with what the client says he or she wants. And then I’ve experienced that same client saying it’s ‘too gamey.’

“Games attract, motivate, and engage people, but many attempts to integrate education or training with games have resulted in applications that neither appeal to learners nor produce targeted learning outcomes.”

Michael goes on to say:

“Organizations often need simulations and serious games to build competence and confidence in their workforce and extended enterprise.” How do we reconcile the vision that games can be powerful tools to achieve learning outcomes with the reality that most compromises made while creating games result in something that is utterly useless?

First, let’s look at the targeted outcomes. In an online role-playing game, you can expect to spend roughly two hours getting familiar with the environment. You gradually figure out how to get your player necessary tools, how to navigate the landscape, and which controls you have to be ready to work quickly to escape danger. In games, skill acquisition is often a by-product that ‘happens’ while playing.

In training, play might ‘happen’ while on the way to skill acquisition. Someone decided training was the way to achieve this skill acquisition, which means at its heart, the targeted outcomes of training and games might be very, very different. Any attempt to consider a gaming solution for a training problem requires a very thorough analysis of the targeted outcomes to determine if they’re compatible with the kind of complex interactions that happen during game play.

Are you willing to create a training event where learners willingly spend two hours ‘figuring out the landscape?’ No? Didn’t think so. Games require a voluntary investment of time. Gamers aren’t forced to negotiate for zombie-proof armor; they want to. They thrill in the best Kevlar, bite-proof shoulder pads. And let’s face it, most learners approach training as though it’s a trip to the dentist: something to be endured several times a year, ideally as quickly and painlessly as possible.

Games with more complicated outcomes (surviving a post-Apocalyptic world, protecting the maiden spirit of a fantasy world) require time. No one who designs a game says, “Hopefully, they’ll find the dragon’s treasure quickly so they can quit and do other things.” Nope.

Of course, one could argue that the current generation of mobile games invites much shorter time investments:  three slingshot tosses and you suddenly understand everything you need to know about Angry Birds – time invested:  four minutes.

But keep in mind games experienced this way often have a one-dimensional targeted outcome which is repeated over and over and over. The kinds of behaviors most businesses want to target in their employees are multi-faceted: software that relates to business practices, sales that reflect company values, customer service that leaves the door open for future sales. You’re not going to accomplish that by flicking your index finger across the screen until your bus finally arrives.

Most training does not encourage learners to linger and stay. We develop the bare minimum of interactions and scenarios that we believe will master the performance outcome; anything else is ‘overkill.’ There are very few enrichment activities because enrichment requires more money and development time.

And that brings up another sticky wicket. (Ever been curious about that phrase? Follow the link.)

What was your last e-learning budget?

If you’re a fan of the gaming industry, as I am, you pay attention to not just the games themselves, but who makes them, how they’re made, and what it actually takes to create games. The average price of multi-platform, next-generation game production slowly rose from $1M–4M in the year 2000 to over $5M in 2006, to over $20M in 2010. In fact, in a 2011 article about soaring game development costs, they estimated an average as high as $28M. 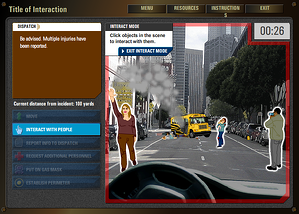 Of course, training games won’t have the same development challenges as games sold to the public and casual games developed as mobile device apps are cheaper to build. But you’d be surprised how much it costs to explore and create multiple right paths and options, to allow for ‘surprises’ in a gaming environment, and to build meaningful record-keeping. Perhaps most frustrating to budget-conscious stakeholders is that frequently, ideas must be explored, programmed, and tested only to be discarded. Sometimes the only way to figure out if a game is fun is to build it and play it. This is not always a practical strategy when you’re attempting to develop supervisory training on a $140K budget.

By now, you may think I’m headed down the path of advocating the separation of games and training.

Absolutely not – as stated earlier, I am a strong believer in game-oriented solutions. I’m a fan of “game-like”!

We need to get clear on what game-like really means.  My recommendations for achieving more clarity include:

Once we talk about those three dimensions, we can start to identify which game-like elements might apply to the unique training situation. As I write these words, I’m struck by how a companion article to this one might focus on what game-like qualities you can utilize (timers, ability levels, reward systems) without building actual games.

Any interest in that? Let me know via your comments on this blog if you’d like me to expand further on game-like, and if there’s enough interest, I will write that article next. Otherwise, I’m going to expand on the difficulty of slaying zombie hordes, even in the very best bite-proof Kevlar an avatar can buy. Your choice.