Reflecting on a Holiday Tradition

The other night I had the pleasure of engaging in one of my favorite holiday traditions:  watching the 1947 Warner Bros. film Christmas in Connecticut.  If you’ve seen it, you know it to be one of the warmest, most charming of holiday films.  It centers on a Martha Stewart-like character, Elizabeth Lane, played by the irresistible Barbara Stanwyck, author of a popular magazine column, “Diary of a Housewife,” in which she routinely describes her perfect lifestyle as cook, chicken farmer, wife, mother, etc. in the idyllic Connecticut countryside.  The only problem is that’s she’s really a single girl, domestically-challenged, living in a tiny New York apartment.  Hilarity ensues when her unsuspecting editor commits her to prepare one of her signature Christmas meals for a sailor returning from battle. 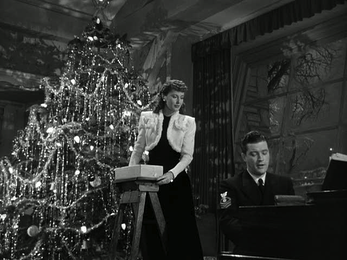 The problem is that Ms. Lane knows how to convince anyone of her expertise, but when called upon to actually do anything, she’s absolutely helpless. It’s a trap so easily to fall into.  I see it far too often when listening to tool vendors or content suppliers or conference speakers. On paper, the instructional designs and content plans look like the real thing…but too rarely does anyone bother to look beyond the surface to see if they actually do any good, either for the learners or for the organization.  As in the movie, ability to relate content knowledge doesn’t necessarily translate to competence in performance.

As we wrap up yet another year, I find it helpful to reflect on these challenges and others and make a commitment to avoid the same mistakes that for so long have kept e-learning from reaching its potential impact.  And just for fun, take a look at this wonderful film.

All of my colleagues at Allen Interactions join me in wishing you the very best of everything, whatever your traditions, in this holiday season.  Below you’ll find a little game built in ZebraZapps to entertain you for a few moments – help Santa build the last two toys for Christmas!

Help Santa build the last two toys in time for Christmas! | Roll over the white "Z" in the bottom right to access the video controls, which allow you to maximize the zapp.