Design is a discipline that is hard to define.  It exists in an extraordinary range of contexts:  instructional design, architectural design, industrial design, fashion design, game design, graphic design, software design, experience design—the list goes on and on.  Because of this diversity of application, it is difficult to formulate a concise definition of design that isn’t so general that it loses usefulness.  But I think it’s important that designers have a definite sense of what it is that is required of them.  A common foundation in design, no matter the field, is that the designer is working to accomplish some goal in a particular environment, using a set of components that exist within some set of constraints.  That’s accurate, I think, but not very useful.  More specifically, an essential part of design is that the designer has to have in mind as a goal some desired function or outcome, and the work of the designer is centered around achieving that function--sometimes with grace, sometimes with beauty, sometimes with economy—but always with reliability and ability to replicate.

This applies especially to instructional design.  If a piece of instruction fails to produce a predictable change in the learner, it hasn’t been designed appropriately.  And to design appropriately for instruction, we need to understand the design elements we have at our disposal and truly understand what various strategies might hope to accomplish.  In working with many designers of e-learning, I fear that outcomes are often poorly understood and that design elements are often applied almost randomly with only a vague hope that they might work.  Just transferring content to the screen and then testing whether a learner remembers it is not design.  Design creates purposeful interactions based on a confidence that certain strategies can create predictable results.

First, as you’ve come to 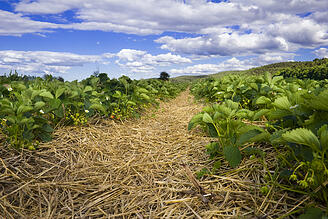 expect in this blog, a seemingly unrelated analogy:  Strawberries are the main crop we grow on our produce farm, and I spent some time spreading a loose layer of straw over the dormant plants.  An acquaintance questioned the timing of this since we’re well into winter here, long past the first hard freeze.  His assumption was that the straw is needed to protect the plants from the cold, and that spreading the straw two months after our first hard frost is like closing the barn doors after the horses have escaped. However, the straw has very little to do with protecting the plants from the cold; it does that a little, but honestly, the plants are sufficiently hardy to survive our winters without protection.  The function of the straw is really to keep the plants dormant in the springtime; this delays new growth and the bloom and so the blossoms will be less likely to be hurt by late spring frosts. Also, as the plants grow through the straw in the springtime, the straw provides a great bed to keep the berries from being muddy.  It’s a great instance of the function of a process not serving the expected purpose, or the purpose it might serve in other contexts.  Operating under sloppy thinking, amateur growers can seriously hurt the strawberry crop by putting on the straw too early in the fall or by taking it off too early in the spring…both of which would be very easy to do if the grower didn’t really understand the function of straw in strawberry culture, but rather applied it under the general assumption that straw must help strawberries survive cold weather.

It is so easy to implement a design feature in instructional design inappropriately because we haven’t bothered to really understand its function.  Unfortunately, I rate applications of avatar-creation software often into this category.  We’ve seen avatars and sophisticated 3-D modeling used to great effect in gaming and also in short marketing pieces in film and on the Internet.  I’ve only rarely seen examples where the 3-D representational aspects of avatar character used in e-learning performed an essential part of the learning or even the learning engagement.  In gaming, the control of at least some of the characters is in the hands of the user which gives the player something active to be engaged in.  In most implementations of avatars in instruction I’ve seen, the author maintains control over the avatar, leaving the student ultimately unengaged.

The problem isn’t that avatars don’t have value.  Rather, it is that the designers are applying misplaced surface assumptions about a strategy (avatars are intrinsically interesting and create interest) instead of really understanding what instructional role the practice might actually play (avatars might heighten the choices and control given to the learner and increasing the fidelity of intrinsic feedback in the learning environment.)  Most examples simply use avatars as a tour guide, a lecturer, or a coach.  These functions may be useful, but that are only marginally and usually only temporarily enhanced by 3-D representation.  On the other hand, conversation and customer service training where the avatar might provide adaptive and semi-lifelike responses to user actions could serve a unique role in creating risk and providing feedback.  Unfortunately, like misapplying straw to a strawberry patch, implementing a technology for the wrong reasons can often make instruction even less likely to occur than it would without the technology.

Of course, the problem is that nearly every tool and every technology marketed to the e-learning community is sold as a “solution.”  This perspective ends up often circumventing the whole purpose of design.  Instead of looking at instructional problems, it declares a solution before the problem is even analyzed. Unfortunately, this mentality bypasses the whole idea of design.  Design should start with a problem; the design process identifies strategies that are relevant to solving the problem.  Selecting a solution and applying it across the board based on naïve assumptions will rarely result in a positive outcome.